Sea of Poppies by Amitav Ghosh

rating: 5 of 5 stars
Many have commented on the vibrancy of historical detail and breadth of research in this book, so I will not bother repeating the other readers - it is all true and the praise here is well-deserved. I would like to say that I particularly loved what several other reviewers have found somewhat difficult, and that is the unique and amazing language side of this book. The author claims to be a descendent of one of the main characters, a dispossessed raja who at the end of this installment of the story, escapes imprisonment and, as is clear from the comments, goes on to make a life for himself as linkister (a linguist) in a foreign land, probably China. It is not enough to say here that the whole way the dialects are handled is unique - it is well known that even in modern India more languages co-exist than anywhere else; additionally, we are treated to the lascar hookums, pijjin English, the British and French colonial lexicon, American 19-century Southern idiom, to name the main ones.

I know some readers found it difficult to follow the paced introductions of the parallel lexicons, and I have to say, I myself have this annoying general reading habit to skip ahead, as I cannot wait to know what the end is. I have to say, it has never deterred me from coming back to my marked place of departure and finishing a book while finally paying full attention to the richness of language and the peculiarities of style. This book was so much so the case - I kept coming back, re reading, surging forward and coming back. When I had about 60 pages left, I could not bear to finish it and put it aside, so much has the idiom become part of my thought process.

There was a test we were put through while at the language school (which I must say I used to profoundly resent at the time, impatient as I was as a young student). The task was presented as an initially incomprehensible jumble of invented language words with maybe one or two words in English in between. The student was to search for the meaning of the word, to uncover more meanings of the surrounding words from the context, and progressively build up on it. After a full session, the task culminated in being able to translate back and forth between the English and the invented lingo. The task was timed, and no matter how impatient you were to skip ahead, it took exactly the alloted minutes to start owning the new words and their sometimes multiple meanings. Furthermore, when we studied the regular European languages at the school, the emphasis was placed not on translating back and forth between English and our native language, but on learning the many meanings of various words and idioms in the target language, starting to think in the language you were studying.

To me, this concept is brilliantly presented in Ghosh's book - the pacing, the introduction of the languages and dialects, first incomprehensible, and then fully understandable, the tension it creates, finally culminating in the publication of Raja Neel's Chrestomathy, is one of the most amazing linguistic works I have encountered in fiction. It is a nice addition that it is solidly based on a well-developed story full of interesting characters who are the mouths speaking these various idioms - with both these factors going for this book, the next two books cannot come fast enough! Well recommended and a reading well worth your time. Interest in languages definitely helpful!

A Lunch with a Friend 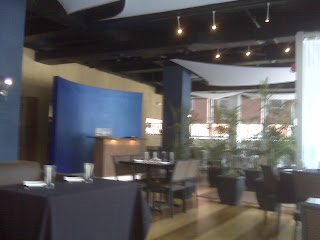 I love dining alfresco spring into late fall, as long as I can get away with it, and this summer has not been kind to my fondness for the outdoor meals. Chilly evenings and almost constant rains have been keeping us indoors, save for a few lucky hours here and there, which were so rare that they seemed to be better spent running and hiking than dining. Friday afternoon the rain finally gave us a brief respite, so I and my friend and colleague Angela Lee Chen were able to take a pleasant walk down the block to the restaurant Blue, in the city of White Plains where we work. Angela's brother Daron Lee is a graduate of the French Culinary Institute and a chef at this White Plains, NY, gem of a restaurant. Although the menu offers plenty of interesting options, nothing is better than taking a seat by the huge French window and having the chef send out some of his favorites and new inventions. The beautiful and breezy interior design complements the eclectic artful presentation of all sorts of vegetarian, meat and seafood fusion dishes. 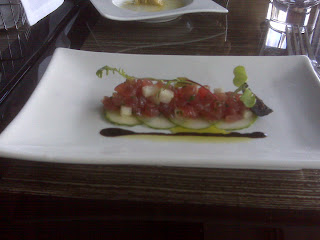 Old favorite with a new twist - tuna tartare with jicama, and the overall winner of the day from the new menu is the truffle dumpling in chilled corn broth. A very special lunch, and one very grateful diner! Blue can be reached directly, with a newly redesigned website coming soon. 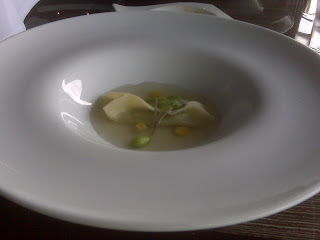 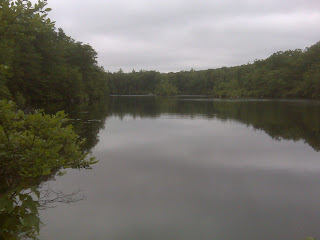 A Dip in the Lake

Well, I could have said - purification, and all the high notions, but in the end it was just an extremely enjoyable hike in the woods, with a swim in between. Fahnstock park, to be exact. It was great to walk in the woods. I love this trail. It leads to a small freshwater lake in the woods called Beaver Pond. The beauty of it at all times of year doesn't stop to amaze me. It is in the depth of the woods and just yards from the trailhead becomes a thicket of blueberry bushes, ferns and all sorts of vegetation. So many memories are connected to this trail. My good old dog Theo used to run on it. Overheated, he would arrive at end point, the lake, and drink in buckets of water, only to disgorge them an hour or so later. He ate a lot of grass and cooled his paws in the water, but was hardly a swimmer. Chester the beagle was tried out off leash on this trail - never again, as we almost lost him to the smells and attractions of the perfect hunting ground. For a while, we gave up on the idea of taking him hiking. He is not what you would call an awesome hiking companion, but this time he refused to be left behind in the city. Once on the path, he pressed on, whirling around to direct us to every wild animal smell he could spot.

Hershey, our chocolate lab, first learned to swim in the little lake. He jumped in and completely went under, causing us a moment of absolute horror, and a second later came up for air, paddling his paws and using his tail as a rudder, like he was born into the water. And look at him now. Besides running off leash at full speed back and forth and covering twice the distance with his constant returns to his slower companions, he dives right in - he knows why he is here and never hesitates. The water was high this time due to the heavy rains and he seemed to have to swim harder to get back with his ball.


I wasn't sure the water would be warm enough to swim but it certainly was! Cool and refreshing, and not freezing at all. 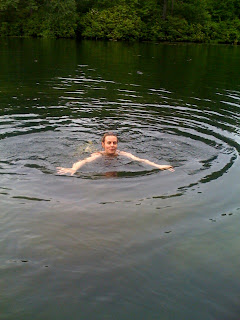 After doing intense energy work on many different people for two long weekends in the yoga seminar I needed to have that cool fresh water carry away all the webs and tangles of other folks' karmas. The feeling of being accepted by the water brought so much relief I could feel a huge weight lifted off my body. I floated and felt light, treaded water without stepping on anything solid. When it was time to leave we walked back on the trail to where we started. Some of the "swamp pink" is still showing its delicate short-lived flowers, and the green is still fresh in the early summer, washed by the recent constant rains. 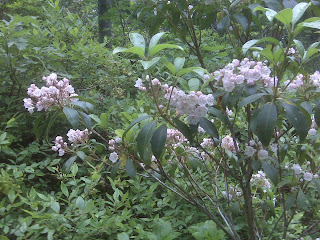 Next time we go, there will be other flowers, new blooms and fruits, and a heavier scent of a hot and humid summer. Whenever we hike to the lake it's always perfect, like a picture in a meditation, this moment of oneness - a prefect rolling path with a fresh lake at the end, waiting to receive the tired feet of those who made the pilgrimage. 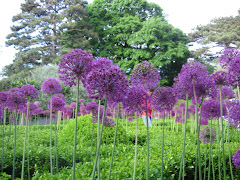